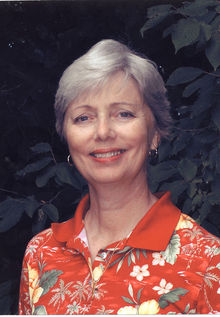 This posting is the obituary for my lovely wife who went by the name  "Whitestone".   Judy's battle with cancer ended June 23, 2013  This will regrettably be the last post on this blog.  Thank you for loving and supporting her. She is now with her Lord and Savior Jesus Christ.

Judy Elaine Peterson, 68, of Onawa, IA, went home to be with the Lord Sunday, June 23, 2013, at Burgess Health Center in Onawa, IA after a 4-year battle with ovarian cancer.
A Memorial Service will be 11:00 A.M. Saturday, June 29, 2013, at Evangelical Free Church in Onawa, IA with Pastor Tim Koehn, officiating. There will be a private family burial in the Onawa Cemetery, Onawa, IA. There will be no visitation. Arrangements are under the direction of Rush Family Care Service, Onawa, Iowa.
Judy Elaine was born February 15, 1945, in Onawa, IA, the third child of Otto and Ellen (Jackson) Hall. She grew up on a farm in Kennebec Township, Monona County, IA. She graduated from Whiting High School. Later while working for the Monona County Soil & Water Conservation District she attended night school and graduated from Buena Vista University.
Judy's great joy in life was her family. In 1988 she married James Peterson. Together they had four children, Summer, Susan, Shawn, & Steven.
Judy enjoyed all aspects of homemaking, gardening, and was a prolific quilter.
She was active in her church and taught Bible for years to women in jail and prison.
Survivors include her mother, Ellen Golden, of Onawa, IA; her husband, James of Onawa, IA; their children, Summer Tuller , Susan (Mark) Belflower , Shawn (Leslie) Peterson, and  a sister, Ellen (Tim) Bennett; three brothers, Fred Hall, Terry (Mai) Hall, Thomas (Lois) Hall, nine grandchildren, eleven great-grandchildren, and numerous nieces and nephews.
She was preceded in death by her father, Otto, and her brother, James.
Memorials may be directed to Burgess Home Health and Hospice of Onawa, IA.
Posted by WhiteStone at 9:20 AM

Bible Reading for the Day

WhiteStone
I may be old enough to be your grandmother but I hope you will enjoy my musings. Currently my favorite scripture is Romans 8:28-29. I also love Colossians 1:13 "For He rescued us from the domain of darkness, and transferred us to the kingdom of His beloved Son..." The verb "rescued" is active, past tense. It's done! Every time I read that verse I can't help but sigh with great appreciation for the great love of God for His people. (And, Yes, I love having you comment! So please do.) I am also a survivor of Ovarian Cancer. I'm not certain how you define survivor except that I live each day joyfully. That seems a good way to survive.

Hi, if you're here because you googled for a Clovia doll please leave a comment on any of my posts. I had a Clovia doll in 1950 and have a photo to prove it. Would love to correspond with you if you had one, too.

Books I Am Reading

Where in the World Do They Come From?